Way back in April, I wrote a post on Meerkat Musings that explored the misogyny that exploded into life when the first Rogue One trailer dropped. ‘Another female lead’, decried men who couldn’t handle this idea. Naturally, nothing else about the film mattered.

With the new trailer having debuted earlier today, this criticism of the film has returned. Let me explain why it’s completely unfounded, and instead rooted in some misguided ideas.

Welp, since one wasn’t enough, the Big D had to double down:

Coming to theaters soon is Episode 2 of Star Wars: Female Reboot.  Gear up this December for an Epic Showdown between Woman and Sinister Man who for some reason will get his ASS kicked despite having every MENTAL and PHYSICAL advantage.  Prepare yourself to JOURNEY across the stars with said Female while she rallies a group of MALES who would otherwise SHIT on their own FEET but with the Woman manage to save the GALAXY.

Soooo, the same thing we had last December?  Got it.

Whoa, there’s some serious anger here toward the idea of having leading female characters in Star Wars. His complaint in this paragraph is aimed at the character of Rey, who beat Kylo Ren in a duel at the end of The Force Awakens. Did Ren have every mental and physical advantage? Well, he was shaken by the fact that even as his father was dying in his arms, he showed his son he still loved him. He was hit by remorse and guilt and questioning his choices, so no, I don’t think he was mentally stronger than Rey at that point. He had also been shot, and by the time he fought Rey he’d already been exerting himself in an injured state against Finn.

Let’s not forget that Rey is apparently powerful in the Force, perhaps more so than Ren, and finally, Snoke mentions that Ren’s training is not complete.

So does it stretch the imagination a little to think that Rey could beat Ren? Maybe a little, but certainly not to the extent implied here, and I can’t imagine this article being written if Finn were in Rey’s place and had beaten Ren. It’s got everything to do with Rey being a woman.

What happened to you, America?  You used to be cool.

Let’s see how many stereotypes we can fire off in one paragraph. Let’s also betray our ignorance of Star Wars (Princess Leia was in the thick of the fight in Return of the Jedi, and kicked ass in A New Hope as well. To say nothing of women who serve in the armed forces in real life). Evolution isn’t responsible for the roles Harmanson defines – social constructs are.

I suppose it’s because people’s memory on these things lasts about 3 days.  A week if we’re lucky.  In this time frame, woman have always been running the world.  Wait, why do men even exist?  I can’t remember.

Go ahead, everyone — send me all your anecdotal evidence of awesome broads.  Talking to you, feminists, and you, pussy men who are trying to suck up to women.  Whatever you send, I don’t care because I deal in bigger terms.

In other words, his mind is made up, he’s convinced himself he’s right and no facts will actually change his mind.

Let’s run it back one more time for the short bus: these movies are for little kids.  Little kids like to play make believe.  Little girls make believe about pretty houses, dolls, and playtime with their best friends.  Little boys pretend they’re off in space killing bad guys.  And in these little boys’ imaginations, who do you think is alongside them?

If Star Wars is for little kids (which isn’t true anyway, but that’s beside the point) then why is Harmanson so worked up about it? The gender stereotyping here betrays what he believes men and women should be doing, and it’s utterly offensive to both men and women to catagorise people in such a fashion. 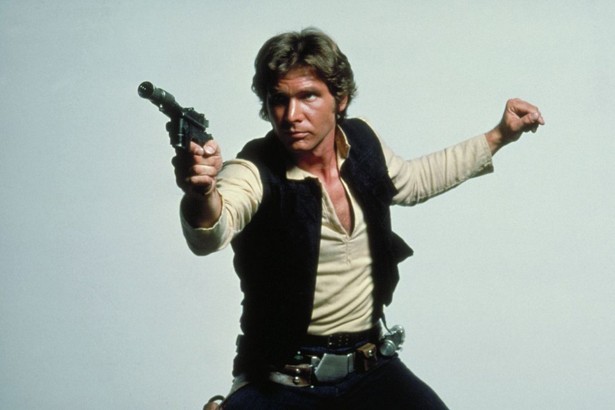 Or, for the young boys who will one day get shoved in lockers, it may also be this person:

One day the world will figure it out.

* OK, she may be in my fantasies, but you get what I mean.

So aside from objectifying Rey, he also fails to understand something about Star Wars – it has A: always had strong female characters and female characters in positions of authority, and B: In six of the eight films made so far, male characters have been in the lead positions. Furthermore, men are hardly marginalised in The Force Awakens – I guess the contributions of Han and Finn are overlooked by Harmanson.

8 thoughts on “Star Wars: Rogue One, the Misogynist’s Nightmare”

This site uses Akismet to reduce spam. Learn how your comment data is processed.